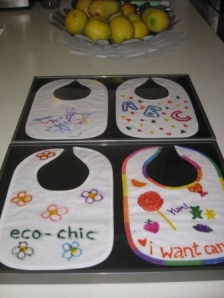 I have landed in the land of DIY.  I read home and garden magazines (how sad right!) and I saw all these articles about people doing their own home renovations and making their own artworks and decorative things and I thought ‘bleugh – who has time for that? who does that ?’ and here I  go, I did it! yes I made my own artwork thingy.

One of the fun things that we did during my  baby shower which my lovely friend and amazing boss (Holley) organised for me was to decorate baby bibs. I’ve kept them all in Mahya’s special chest of treasures at the foot of her cot. This week I put a few in a frame with the intent to hang them in her room. Thanks eco-chick friends!

I don’t have a lot of other DIY projects, but one project is Jayden and helping my little boy with a few things like learning to use scissors, hold a pencil, be able to start and complete a task and learn his letters. He’s never been artistic, nor had much interest in writing and doing craft and for the last 6 months I’ve had a lot on and neglected him in many ways. Now I’m trying to correct that and I can see a change in his behaviour.We did an activity today which was fun and was multi-faceted. We looked through magazines and picked out things that started with a letter making sure to make the sound. Then he had to cut that thing out, and stick it on the paper. I would then write that letter (lowercase) on another piece of paper and would trace it with my finger. He would then do the same and try to write that letter. He has a long way to go, but did really well. it actually made a huge difference getting him to first trace, then write the letter. We did 7 letters today and he wasn’t too proud of his efforts when he went to show his daddy, bu. I can tell that he knows he’s not great at it (he is a perfectionist) but I’ll keep working with him and I am sure he will get much much better.

I have other DIY projects in mind….but stay tuned for more later….