Earlier this year, I went to Italy. Yep – a big overseas trip with three children! Not sure what I was thinking, but I really wanted to go and I try to be one of those ‘My kids are going to stop me’ kind of mums. So we saved and saved, got the time off work and booked the trip. Everyone was excited. It was our first big trip after the birth of my third child.

Everything started well.  We had a stop in Abu Dhabi which still feels like home to me. We caught up with friends and enjoyed going to some of our old haunts and checking out some new ones.  Abu Dhabi really is so easy and fun for kids. Parks and beaches galore!

We first flew to Venice. Beautiful yes, but we were a little bit of a walk from the main sights, so lots of walking and not so much fun with a pram. Up and down bridges and steps!  The kids had fun though, but after about 5 days of not being able to really let them get loose in a park (a crowded plaza really is not the same), we moved on.  We were even brave enough to hire a car and so our Italian road trip began.

How was travelling with three kids in Italy? A LOT of work. We managed to remain sane for most of the stops. We stayed in apartments and tried to incorporate children friendly activities and days throughout, but by the time we arrived in Rome everyone was tired.  We could only get them so excited about museums and after many tense experiences (the Vatican was the most intense and stressful experiences of the whole trip – so so many people) at various sites, we decided in Rome to try our hands at making the experience of going to museums more fun for them.

One of our tricks was a treasure hunt. Through this we hoped that the older two would actually even look at some of the art works. It worked a treat – but my kids take treasure hunts VERY seriously, so we really had to research to make sure that the things we put on their list, they were able to be find.

While they enjoyed the trip and the copious amounts of gelato and pizza they got to eat, the whole trip was so draining that I swore to never do a big trip with them again. Yes we’ll see how long that lasts.

Once we got back to Sydney life continued at a breakneck speed. But in all the insanity we did manage a trip to the Art Gallery of NSW to see the Frida Kahlo and Diego Rivera exhibition.  I had been meaning to go for a long time and finally got the time to do it.  But with some of the pain of our Italy museum experiences fresh in my mind, I decided to re-visit my survival toolbox and out came the Frida Kahlo activity sheet!

No, the art gallery did not in fact have anything for kids, so I did some research the night before and put together an activity sheet. Did it work? Yes – for the older two it did.  While they were busy with their activity pack, I did get to wonder through the exhibition and I have to say I was a little underwhelmed.  The art works were great, but there really wasn’t too many of them. Much of the exhibition was a celebration of the artists, rather than the art. We photos and video footage being the centre of attention.  So from that regard, I was a little disappointed. Also the exhibition was VERY crowded. The way we experienced it was to be in a big conga line and just walk single file past the art works. There was no place to sit and linger, which made doing one of the activities I had (to sit in a quiet area and draw one of their favourite paintings) nearly impossible.

In the end I was glad to go because if I hadn’t I would have wondered about what could have been, but the most fun we had was going to the Sydney Botanical Gardens. My daughter had just attended a school excursion there so was full of excitement to show me her favourite parts.  The whole day was helped by the glorious show of weather Sydney had for us and with the promise of a gelato at the end of the day, the kids enjoyed the rest of the day.  So my tips for a cultural day out – bribery with gelato and an activity pack that includes a treasure hunt!  I’ve included my Frida Kahlo one. I hope you find it useful. 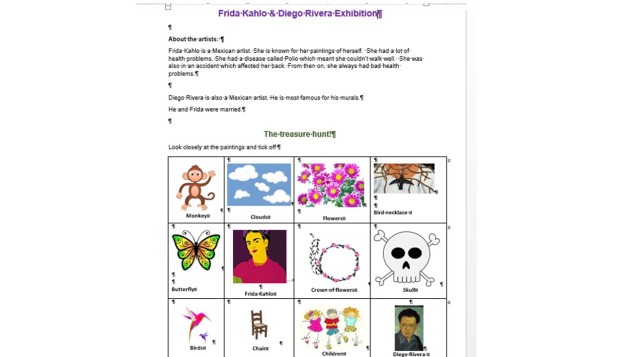