I was never much of a coffee drinker until fairly recently. I never liked the taste – not really through university and not really in my earlier days of working. At the moment however I enjoy a cup of coffee a day. It’s more the habit of it that I enjoy. I like taking the time out to prepare and drink it.

My husband on the other hand is a coffee drinker from way back.  Every day without fail he’ll have a cup at about the same time.  Over the years the standard of coffee drunk has increased. From the instant coffee to buying his own beans, grounding it and using various methods to extract the coffee.

When we moved to the UAE, he bought a cappuccino maker. We felt very fancy. Then it broke and after some reading I bought him a better one for Father’s Day one year. He broke it! then I arranged to get it fixed – then he broke it again and again! In the end we had to get rid of the cappuccino maker.

When we moved back, we managed to acquire my sister’s cappuccino maker – which my husband promptly proceeded to break. So after that I had to put my food down and say no more cappuccino makers. This happened to be about the time that the coffee pod machines became super cheap and stores like Aldi started to sell the pods very cheaply too. Despite my reservations my husband bought one and thankfully in a way he’s managed to not kill the machine. Except that every time we made a cup of coffee it was filled with guilt. Guilt about all the pods we were throwing in the bin. The plastic that was never going to degrade and the mountains of coffee pods that must surely be filling up landfills.

Some facts about coffee pods:

Apparently, the inventor of the coffee capsules, K-Cup, who sold enough capsules in 2013 to circle the earth nearly 11 times, wishes that he never created them in the first place and is said not to use them himself “No matter what they say about recycling, those things (K-Cups) will never be recyclable,” John Sylvan told The Atlantic. “The plastic is a specialised plastic made of four different layers…I feel bad sometimes that I ever did it.” (http://www.ecocaffe.com.au/news/3-million-pods-a-day/ )

Lately we’ve justified the use of our machine because there is a recycling point in Lane Cove. While this is better than disposal, the multiple layers of plastic and aluminium used means that it is in fact very difficult to recycle coffee pods and in many cases unless the aluminium pods are collected by TetraCycle who have specialist way of collecting and recycling the pods, they are not recycled at all. Certainly the plastic pods are not recyclable, therefore end up in landfill.

Then there is the compostable or biodegradable coffee pods. These are a lot more expensive than the average coffee pods and again there is no simple way of throwing them in your compost bin and hoping for the best. You need a special commercial composter to compost them. If they’re thrown in the bin in the hope of biodegrading in landfill they end up emitting methane – a very powerful greenhouse gas.

In short, the whole thing stinks and with 3 million pods being used every day, it doesn’t take much of an imagination to see that this is big problem.

About six months ago though I decided that enough was enough. Being an eco-mum, I wasn’t just concerned about what to do with the pods afterwards. My concern was about the use of resources to manufacture the silly pods in the first place. So I decided to go back to the way coffee is made in other countries like the Middle East and Italy – using the Moka Pot. This is a stove top coffee maker where water boils in a lower chamber and the steam creating pressure that then passes the vapour through the coffee to an upper chamber. It’s kind of like magic really!

I bought myself one of these pots along with organic fair trade coffee. The results have been good. Taste wise I like it and I especially like the process and the aroma that drifts through the house.  Time wise- it does take longer, but from a waste and materials use point of view it really is the way to go.  Especially as I compost all my coffee grinds and apply that on my vegetable patch. 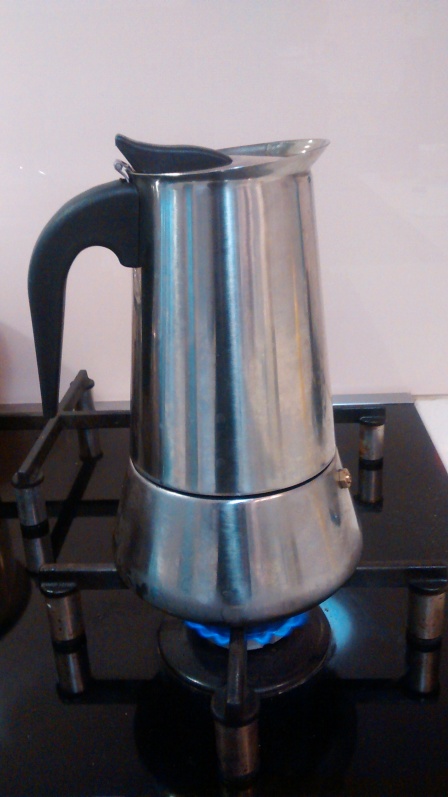 My husband on the other hand remains unconvinced. He swears that he likes the taste of the coffee pod machine more and while he’s usually very supportive of my eco-ventures. This is one where he is standing his ground – excuse the pun! I on the other hand will continue to put forward the case that our house needs to be a pod free house.  I urge the millions in Australia and beyond to follow suit.

With the new year just recently started, I ask everyone to make a pledge for the planet and enjoy a guilt free cup of coffee and if you make the pledge try and convince someone else to do it too!

For more information on why coffee pods are harmful, please go to: